If you use social media, you’re probably familiar with the concept of a hashtag. Hashtags on Twitter are essentially a tool for “tagging” your tweets so they appear alongside other tweets about the same topic. If you are managing an institutional (or personal) academic Twitter account, using hashtags strategically can help you expand your audience by interjecting your voice into existing conversations.

But, when is it appropriate to use a hashtag, and how do you decide how many of your 280 characters to dedicate to them? When should you use an existing hashtag, and when is it a good idea to create your own?

When should I use a hashtag?

Hashtags are useful when they are used strategically, that is, when they help you tap into a specific audience you’re trying to reach.

First, take a few minutes and scroll through the Twitter feeds of a few influential users in your discipline and see what hashtags they use.

In Political Science, for example, the most common is #PoliSciTwitter for academic and professional conversations. Institutional accounts often use #PoliticalScience to promote department happenings and news. #AcademicTwitter is a much more general tag, but can be useful if you’re promoting a publication or event about academia more generally, rather than just your specific discipline.

If you’re looking to reach prospective students, #PhDChat may be a good choice. If you’re promoting a job listing at your institution, or sharing a job listing your current students or alums might be interested in, #JobAlert may be useful. But again, because these are very general hashtags, you may find that your post quickly gets lost in the sheer volume of content associated with them. In those cases, you could narrow your hashtag to be institution or discipline specific, such as #PoliSciJobAlert or #CUNYPhdChat, for instance. 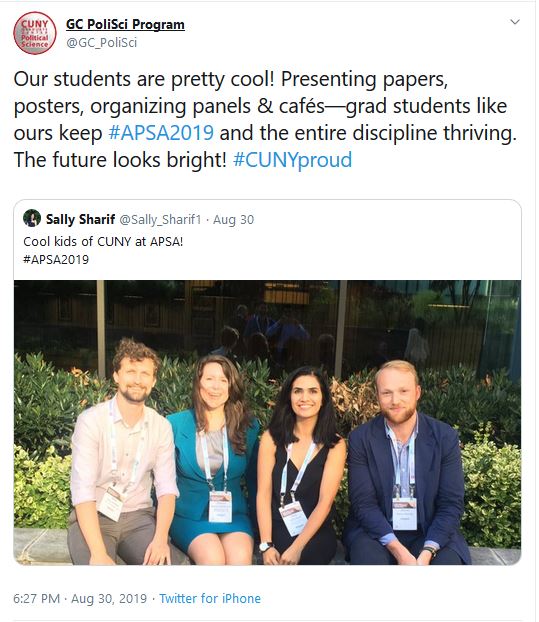 When is it a good idea to create my own hashtag?

When you’re just getting started in the academic Twitterverse it’s better to join existing conversations than to try to create your own under a new hashtag.

But there are a few good reasons to create a new hashtag: if you want to start a new conversation and think you have the audience to build one, or if you’re hosting an event or conference for which you want to create a specific repository, in the form of a hashtag, for all the Twitter content generated about that event. (Read more about best practices for live-tweeting academic events.)

If you are going to create an event-specific hashtag, make sure it’s unique (by using the “search” function on Twitter), make it short and to the point, and if it’s a recurring event, make it the same every year, just updating the year (e.g. #APSA2019 — the American Political Science Association annual meeting).

Essential to the success of a unique event hashtag is consistent promotion. Be sure to include the hashtag in all your social media, web, and event printed materials before, during, and after the event so attendees have it at their fingertips at all times, and make announcements during the event, reminding attendees to use the hashtag. You can also retweet participants’ tweets about the event and include the hashtag, if they omitted it in the original.

The #TermsWorkshop hosted by the Political Science department last year included its own hashtag, which was included on the PowerPoint displayed behind the presenters (the first image below) as well as on the conference program printed and provided for attendees (second image below). 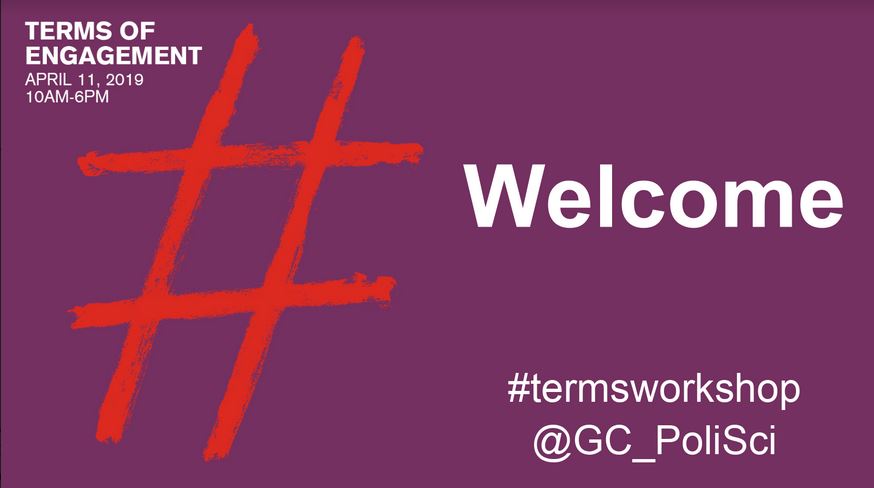 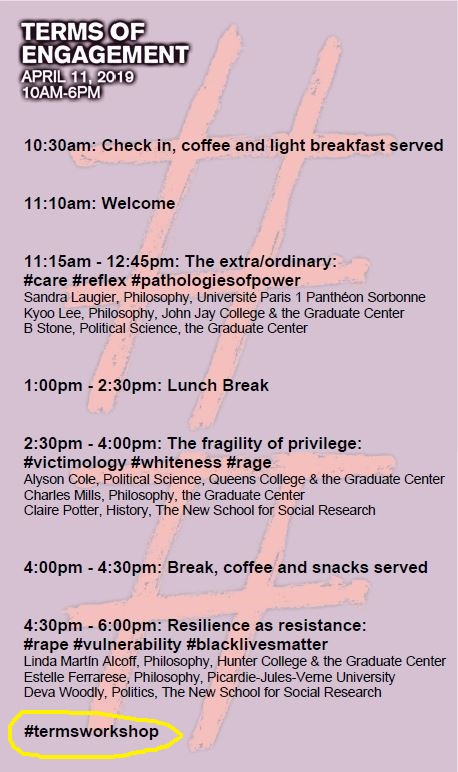 How many of my 280 characters should I devote to hashtags?

The key to using hashtags is balance. Using one or two popular hashtags in your discipline will give your posts an opportunity to gain some traction beyond your most dedicated followers. But don’t use so many hashtags that you lose space to get your point across, and don’t use such general hashtags that your post gets lost in the sea of #politics, for example.

Whenever you can, tag people, institutions, and other entities in your posts by “mentioning” them (e.g. @GC_CUNY or @BStone_ABD). These users will be notified that you “mentioned” them, which can encourage engagement and retweeting, broadening your post’s reach without costing you extra characters.

In hashtags, as in life, moderation is key.

Need help with the Commons? Visit our
help page Send us a message

Built with WordPress Protected by Akismet Powered by CUNY